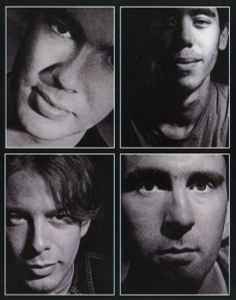 A relatively small recorded output and little media recognition, Bark Psychosis was one of the most innovative artists of their era

August 12, 2022
Talk Talk walked so Bark Psychosis could run. Please somebody reissue "Hex" and their EPs.

Bowery Electric reminds me of Bark Psychosis in some way, I would recommend their 2nd album 'Beat' https://www.discogs.com/Bowery-Electric-Beat/master/21588

October 31, 2007
Bark Psychosis is one of those bands that will probably stand the test of time. Droning guitars, often melancholic and ethereal male- and female vocals companied by dark lyrical poetry make a soup that's hard to ingore. BP draws from shoegaze, indie rock and experimental sonic wizardy -- without sounding unlike any other band out there. While "Hex" was more guitar driven concept, "Dustsucker" is more experimental, wideranging album covering countless styles, ranging from ambient to weird folk-style tracks.

Bark Psychosis is impossible to categorize, so many areas are covered. If you're a fan of bands like My Bloody Valentine or Slowdive, BP is a must check. They are really in a league of their own.