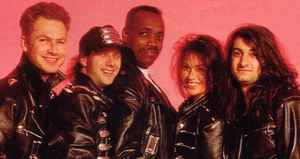 Profile:
English dance music group, Rage (a.k.a. En-rage) are the producers Barry Leng and Duncan Hannant. The project featured vocals by Tony Jackson and later on by Steve Lee (3).

Under the name Rage, they released their first single in the end of 1992, "Run To You" (a cover of a Bryan Adams song). It was a big hit in Germany, reaching #71 on the Best of Charts, and peaked at #14 between January and February 1993. On the UK Charts, it reached #3 between October and November 1992, and #12 on the Netherlands Singles Chart in 1992. "Run To You" was also covered by Jaymz Bee and more recently by Novaspace.

The first (and the only) album was called "Saviour," all tracks sung by Tony Jackson, and containing all the first hits. Then came the single "Give It Up" released in 1993. It was a cover of a single originally released by Creation (from the same producers, under Deconstruction records).

The next single was entitled "Why Don't You," out in 1994, and it was included on the compilation "Ronny's Pop Show Vol. 21." It featured the voice of Tony Jackson.

The follow-up and last single, "House Of The Rising Sun," still with Tony Jackson's voice, was featured on the compilation "Hot & Fresh." It was a cover of a traditional song, previously covered by the the French megastar Johnny Hallyday under the name Les portes du pénitencier. A video was shot, directed by Lindy Heymann.,

All singles were released under Pulse 8 Records (London) in UK and Intercord in Germany.

February 12, 2018
Tony Jackson was the main component of the huge success of this project. With his unique and strong voice, he helped the first song Run to You (a Bryan Adam's cover) to reach charts all over Europe. Even US showed interest in the song. The cover of The Animals "House of the rising sun" is a perfect one.