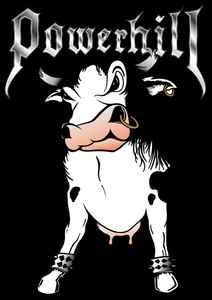 Profile:
Powerhill is the union of a Swiss musician (Cep) with two great passions:
Cows and Heavy Metal!
The Powerhill saga begins in the year 2000 in a small dark and dirty corner of
a cold stable located in a small Swiss town called Taverne from an idea by guitar player Cep.
From there comes the real "Farm Metal", that is a classic Hard Rock / Hair Metal style but completely to the peasant style.
In May 2004 the band recorded a 5-track CD Demo.
Later, after some changes in the line-up, the band started proposing live the Metal-Cow motto.
In June 2006 the single "New Dimension" was included in the Various - Heavy Metal Nation III compilation.
From 2007 to 2017 a forced Stop period follows.
In 2018, with new members the Band offers some hilarious live performances.
Year 2019 follows the publication of 2 new singles (Mad Cow City &
Powerhill).
During the pandemic the Band worked hard on new material and proceeding with several auditions
and finally finding a new singer who joined the band in 2021.
New singles and a new EP will be out soon...
The Guys emanate from the stage a special verve characterized by a show to peasants oriented.
Our Mascot, the "Clotilde" Cow always follows with its eye-catching look all Live performances.
The rest of the story is still to be written!
Or rather, soon again on the road...
The Rocker Peasants are back !!!
Sites:
powerhill.ch, Facebook, instagram.com, mx3.ch, YouTube, MySpace