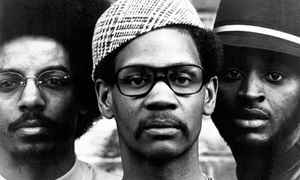 Profile:
The Last Poets are a group of poets and musicians, rising from the late 1960s African American civil rights movement. Jalaludin M. Nuriddin, an Army paratrooper who chose to go to jail instead of fight in the Vietnam War, founded the group in prison after converting to Islam and performing the "spoken word" to a rhythmic beat.

With Umar Bin Hassan and Abiodun Oyewole, Nuriddin was released from prison, joined the East Wind workshop in Harlem, and began performing their spiels, along with music, on the street. Nuriddin joined the first version of The Last Poets, with members Gylan Kain, David Nelson, and Felipe Luciano, but left before the trio recorded and released their only album, Right On, in 1967, the soundtrack to a documentary movie of the same name. As he informed them of the intention to form his own group called The Last Poets, the Right On album was released under the name The Original Last Poets.

Both groups adopted the name the Last Poets from a South African writer named Little Willie Copaseely, who believed he was in the last era of poetry before guns would take over. With the group formed in 1969, they released an LP in 1970, The Last Poets, which reached the Top Ten album charts. Oyewole was arrested for robbery before a tour could begin, and he was replaced by Nilajah.

The follow-up, This is Madness, featured more radical and politically charged poems, which resulted in the group being listed as part of the counter-intelligence program founded by then-President Richard Nixon. Following that album, Hassan joined a southern-based religious sect and was replaced by Suliaman El-Hadi in time for Chastisement (1972). The album introduced a sound the group called jazzoetry, a mix of jazz and funk with poetry. At Last (1974), was a free-jazz album. The popularity of the group declined during the remainder of the 1970s, and Nilajah left.

In the 1980s, however, the group became popular with the rise of hip-hop. It returned to recording in its own right in 1984 with Oh, My People and its follow-up, Freedom Express (1988). Hassan and Jalal worked on several solo projects until 1995, when two groups using the name formed. Jalal and El Hadi released Scatterrap while Oyewole and Hassan released Holy Terror. The group's founding members reunited for 1997's Time Has Come, its only release to date on a major label. Recently, the Last Poets collaborated with Common on the song "The Corner."

Jazz Free/Avant by TiemoOTheYordle
Favorite Artists by aeonpharos
Artists for the Future by Milesbeet-hoven1
Experimental and Avantgarde Music by TiemoOTheYordle
Seen Live..... by MO-Music13
Artists I've Seen Live by MultiTrak
groups to get/check out by m71
Collections Jazz DVD by deepinsoul
My love 4 music by ARW747
Artists by psychicteevee
Favorite Artists by SoulDancer
View More Lists →