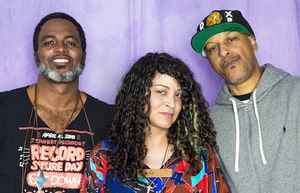 In New York City, a Former Seattle resident Butterfly (a k a Ishmael Butler) hooked up with Philadelphia native Doodlebug (Craig Irving), who was a member of NY dread Poets Society, and Ladybug aka Mecca (Mary Ann Vieira) a Maryland denizen of Brazilian descent. They were backed by Silkworm, who later embarked on a solo career under the name King Britt

By the late 1980s Butterfly had moved to Philadelphia to live with his grandmother while making a living and learning the ropes of the local music scene. He met Doodlebug on the local circuit while the latter was rapping with an outfit called Dread Poets Society, which later became the 7 OD’s. Butterfly, Doodlebug, and Ladybug soon became fast friends and rapping partners. In the early days of Digable Planets, they lived together, first in Jersey City, New Jersey, and later, New York. The last move brought them into the heart of Brooklyn’s black neighborhoods, where they scraped by for a while rapping and working. Ladybug, for example, was selling sneakers just before the group won its record contract in 1992. By that summer, however, they were recording the material for their first album with Pendulum Records

When Digable Planets first appeared on MTV airwaves in 1992, they attracted attention for many reasons, not the least of which was their unorthodox appearance. While most hip-hop outfits tend to be strictly defined by gender—all men highlighting their masculinity or all women carving out their own space— the Planets presented viewers with two men and a woman who was not just a figurehead.

What, exactly, did it mean? The name sprang, they explained, from the notion that every individual is a planet. But the unique worlds that their tracks mapped out were not insular ones; as their Grammy-winning hit Rebirth Of Slick (Cool Like Dat)” would prove, the Planets were primed to connect with audiences weary of the aggressive posturing of gangsta rap.

Butterfly spent his childhood in Seattle, Washington, where he was born in the early 1970s. After his parents divorced, he moved around the country with his history professor father, living in Baltimore, Maryland; Philadelphia, Pennsylvania; and Harlem and Brooklyn, New York. Butterfly’s father provided him with a rich musical environment, exposing his son to an extensive jazz collection. As Butterfly grew up, he augmented that foundation with rap; he also played saxophone in his teen years. Upon completing high school, he attended the University of Massachusetts on a basketball scholarship but quit before long. He decided instead to earn an education in the music business, taking an internship with Sleeping Bag Records, a New York City-based hip-hop label, in the mid-1980s.

Relating a similar early exposure to jazz, Butterfly’s band mate Doodlebug recalled the music of his childhood for Ann Powers of Spin. “My mother would always sit around, reading a book or the Sunday paper, and listen to jazz. My aunt taught me about [jazz legends] Bessie Smith and Billie Holiday, she was always playing the records and talking about them,”he explained. Born in the late 1960s, Doodlebug grew up in Philadelphia before moving to Washington, D. C., to attend Howard University, where he made a reputation for himself as a deejay on the college’s radio station. He also mixed with local members of the religious sect Five Percent Nation of Islam, adopting some of their political ideals of black power.

Digable Planets’ female member, Ladybug, though she was born in Brazil in the mid-1970s, spent her childhood mostly in Maryland. By the time she was in high school, she was a restless young woman; in four years, she attended three different schools. She told Pat Blashill of Details that she “didn’t talk to anyone. I had, like, longass dreads and a nose ring and the other students weren’t used to that…. I just couldn’t wait to get out of high school.” Powers described Ladybug as “a tomboy whose version of climbing trees was learning to rap

Filled with literate lyrics, honey-smooth flow, and inventive arrangements, their albums Reachin’ (A New Refutation Of Time And Space) (1993) and Blowout Comb (1994) redefined hip-hop, and set standards for the generation of soul poets and innovative producers that followed, as the new anthology Beyond The Spectrum: The Creamy Spy Chronicles effortlessly reiterates. The group first took shape in the early 90s, in New York City. Former Seattle resident Butterfly (a k a Ishmael Butler) hooked up with Philadelphia native Doodlebug (Craig Irving), who was a member of New York collective Dread Poets Society, and Ladybug (Mary Ann Vieira), a Maryland denizen of Brazilian descent. Like the name chosen for their band, the new handles each member adopted also reflected a universal consciousness. Insects stick together and work for mutually beneficial causes, Ladybug observed in Essence. Doodlebug added, Humans are supposed to be the most intelligent beings on the planet, and yet we cant seem to come together in a peaceful manner.

Those cats used their vernacular to communicate a new perspective. With unabashedly intelligent lyrical references to everything from Karl Marx (on the reggae-tinged Where I’m From) and Jimi Hendrix, to feminist bell hooks and poet Nikki Giovanni, the Planets boldly followed suit. Critics responded to the Planets debut platter enthusiastically. Reachin’ (A New Refutation Of Time And Space) is everything hip-hop should be: artistically sound, unabashedly conscious and downright cool, proclaimed Kevin Powell in a four-star review for Rolling Stone.

And Digable Planets is the kind of rap act every fan should cram to understand. The record would eventually hit ..15 on the Billboard 200, break the Top 5 on the R&B/Hip-Hop Albums chart, and achieve Platinum sales status. Buoyed up by a bubbling bass line and curlicues of brass (the latter lifted from a sample of Art Blakey and the Jazz Messengers), and peppered with finger-pops, the sublimely chill single Rebirth Of Slick (Cool Like Dat)” became the albums biggest hit. It peaked at ..15 on the Billboard Hot 100 chart, winning legions of fans across a variety of radio formats as well as in clubs. The track deservedly earned the 1993 Grammy Award for Best Rap Performance by a Duo or Group. After touring extensively, accompanied by a live band, the trio returned to the studio, emerging in 1994 with their sophomore outing, Blowout Comb. Even more so than its predecessor, the Planets second full-length pushed stylistic boundaries.

Although Digable Planets dissolved in 1996, all three members have remained active musically. Butterfly went on to form the band Cherrywine, releasing the album Bright Black in 2003. He also composed music for commercial clients including Pepsi and Fila, and ventured into acting, with roles in film (the 2002 Sundance fave I Am Ali) and Off Broadway. Mecca the Ladybug now Ladybug Mecca dropped her new solo album, Trip The Light Fantastic, in June, 2005 on her very own record label Nu Paradigm Entertainment. She also composed the score for a short film entitled The Monster courtesy of Scenarios USA - Kids Creating Social Change in 2001. A segment of the film was featured on ABC World News Tonight with Peter Jennings. Working as Cee Knowledge, Doodlebug has been leading Philadelphia live hip-hop ensemble Cosmic Funk Orchestra since 2000.

In addition Doodlebug is actively the CEO of the successful multimedia company 7 and a Cresent. But most importantly for Digable Planets fans worldwide, the original trio recently reformed to play a number of well-received live dates (including Lollapalooza 2005), and begin work on their first album in over a decade.
Sites:
Facebook, Twitter, MySpace, Last.fm, Bandcamp
Members:
Craig Irving, DJ Jedi, Ishmael Butler, King Britt, Mary Ann Vieira
Variations:
Viewing All | Digable Planets
All The Insects Of Digable Planets, Digable, Digable Planet 3, Diggable Planets