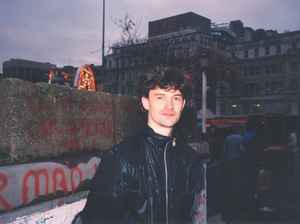 Real Name:
Bryn Jones
Profile:
Muslimgauze was the main musical project of Bryn Jones (17 June 1961 - 14 January 1999), a British ethnic electronica and experimental musician who was influenced by conflicts and history in the Muslim world, often with an emphasis on the Israeli–Palestinian conflict. The name Muslimgauze is a play on the word muslin (a type of gauze) combined with Muslim, referring to Bryn Jones' preoccupation with conflicts throughout the Muslim world. His discography (96 titles at the time of his death) has nearly doubled since 1999, although this counts reissued titles as well as brand-new titles. Jones' posthumous discography is known for including many studio variations of nearly all his music. In 2014 Ibrahim Khider published a 208 page biography titled Muslimgauze: Chasing The Shadow Of Bryn Jones (with bonus CD).
"Bryn Jones was not a practicing Muslim and never traveled to the Middle East. His recordings as Muslimgauze, however, qualified him as one of the Western artists most explicitly slanted in favor of the Palestinian liberation movement. Since the Manchester native’s works were instrumental, most of the political statement was inherent in the packaging: witness titles such as Fatah Guerrilla, Return of Black September, Hebron Massacre, Vote Hezbollah, United States of Islam, and The Rape of Palestine. Jones’s output was so idiosyncratic and prolific that he would remix anything he was given to suit his purposes and recorded an album almost every week.
Jones could have been a potentially controversial figure if his releases were available in anything except extremely limited editions - usually less than one thousand copies of each title. Despite their lack of prominence, Jones’s blend of found-sound Middle Eastern and South Asian atmospheres with heavily phased drones and colliding rhythm programs were among the most startling and unique in the noise and electronica underground. The Muslimgauze project ended tragically in 1999 when Jones died suddenly of a rare blood disease. A number of posthumous releases including Lo-Fi India Abuse (partially a collaboration with the dub collective Systemwide) and the 9-disc Box Of Silk And Dogs soon followed." - John Bush for allmusic.com
Sites:
muslimgauze.org, arabbox.free.fr, Bandcamp, Facebook, Wikipedia
Aliases:
Bryn Jones, E.g Oblique Graph
Variations:
Viewing All | Muslimgauze
Musimgauze, Muslim Gauze, Muslingauze, Muzlimgauze

May 3, 2022
If you search Staalplaat Records of Muslimgauze , buy them directly on bandcamp ! prices here are crazy unfortunately. On bandcamp it's the half of the prices here , with a normal shipping cost :)
Reply Notify me 2 Helpful

In 1995, I didn't have a computer or the internet. I was into "Electronica" music as they called it back then. Went to the local Record store in SF and didn't see anything I wanted, but had a few extra dollars, and remembered some weird CDs from something called "Muslimgauze"... Bought the three that had really tripped me out based only on their covers, as they were really intense.

My three picks were 'Veiled Sisters', 'Betrayal', and 'Salaam Alekum'. I was not disappointed. The music was nothing like I had heard before. That was my introduction to Muslimgauze. I then promptly got hooked, and the Staalplaat and Soilemoon labels turned me on to other great artists like Rapoon...

January 28, 2020
A really amazing artist who terrifically went ahead of his time and produce what is a proper experimental electronic music.Sad to read about his early death, therefore, I wish all the best for y'all music diggers. Let's live our days at once!.
Bryn Jones ++
Reply Notify me 10 Helpful

It's amazing how much music keeps being released after this artist has died. Looks to be more than 50 releases since 1999. Are the proceeds going to relatives?

There are no words to describe his talent and what a genius he was. His early death possibly marks the most grievous loss in industrial music at all. However, let’s be thankful for the vast legacy he left to us. God bless you, Bryn.

A prolific artist in his life and not only unique in compositional style but intelligent and gratifying to those listeners who venture beyond pap pop music terroir. There too many classic MG recordings but as much as I hate the Extreme label for screwing their artists out of royalties my first experience and to this day favorite MG release was Zul'M. Its got everything in it trance inducing electronic beats mixed with ethnic chants, atmosphere and very balanced compared to his former and later harsher sounding industrialized recordings. He was not concerned about peoples opinions esp. the political views that he held regarding middle-eastern politics and that suborn creative nature is what made him a true artist in my book. He made music without the iron grip of money and record labels mind bending this artist to conform to the fashionable music of the times.
Brilliant,ahead of his time and a one of a kind. RIP!

March 5, 2015
I have all his releases, all in digital formats (no actual CDs, LP, etc.). This guy's stuff is amazingly prophetic (not in any religious/spiritual way) in how he seemed to foreshadow the issues/problems/violence of the Arabs, Palestinians, Jews, et. well before it was anything but a regional concern. Highly recommended people investigate...
Reply  See 3 replies Notify me 6 Helpful

October 28, 2012
Sampledelic mid-eastern percussion soundscapes which range from the mesmerising to the tweeter-shredding. Bryn has some absolutely brilliant recordings, with a sound unlike anyone else's, but that's offset by the fact that a great deal of his later work seems like demos, the seeds of ideas as opposed to fully realised ones. I've found his most consistent works from beginning to end are the albums on Extreme, especially Z'ulm and Citadel. Best results will come from wading through his archive and picking and choosing the individual tracks that suit your own tastes.
Reply Notify me 14 Helpful