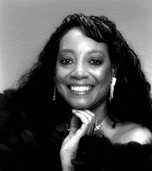 In 1960, when she was 16, she joined a Kansas gospel group, the Alma Whitney Singers, and ended up marrying Harry Whitney (2), the brother-in-law of the group's leader. Ever since, she has gone by her married name, Marva Whitney.

November 16, 2021
There desperately needs to be a complete compilation box set of her 45's assembled and released, preferably done on both vinyl and CD.

Kansas respect!!
Totally ran by me that Marva passed 2 days before christmas.. She truly was the soul sistah #1, and the hottest afro-american funk singer to grace the mic with her white afro hairdo.. slick!
Her voice could tear to pieces a clothing line of bedsheets. Take "It´s My Thing".. Wow, what a track, what a GROOVE.
Rest in peace Marva. Thanks for them rippin´ 45´s..