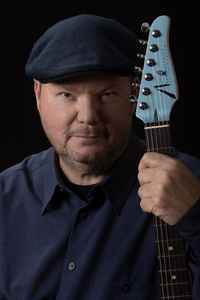 His best known composition is "Arthur's Theme (Best That You Can Do)" for the movie "Arthur" starring Dudley Moore and Liza Minnelli.
The song won the Academy Award for Best Original Song in 1981 (shared award with Burt Bacharach, Carole Bayer Sager and Peter Allen).

Cross played with an Austin group called Flash before signing a contract with Warner Bros. Records, thanks to which he released his debut album, "Christopher Cross" in 1979 for which he won 5 Grammy awards. He received in the same gala the 4 main prizes that are: best recording, best song, best album and best novel artist. Of this album they emphasize the songs "Sailing", "Ride Like the Wind" and "Never Be the Same".

His second album, Another Page released in 1983 included the songs, "Think of Laura" and "All Right".

The song "Think Of Laura" has nothing to do with the characters Luke and Laura from the soap opera General Hospital. He allowed ABC to use the song in this context; however, he has stated that he wrote "Think of Laura" not in reference to the television characters, but to celebrate the life of Denison University college student Laura Carter who was killed when she was struck by a stray bullet.

Cross contributed voices in the 1985 David Lee Roth song called "California Girls" and also voiced Alan Parsons' song "So Far Away" and has once come up with him on stage to play it.

The song "Loving Strangers (David's theme)" is part of the soundtrack of the movie Nothing In Common from 1986, with Tom Hanks and Jackie Gleason.

His daughter Madison Cross is a singer and actress.

The oldest son of Peter Griffin in the series Family Guy is named Christopher Cross Griffin.