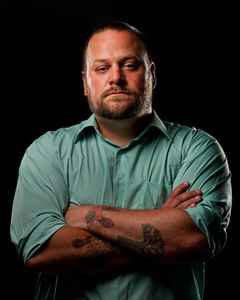 Real Name:
Brendon Whitney
Profile:
Alias, born in Portland, Maine on April 5, 1976, to a jazz drummer and a church organist, grew up in a suburb called Hollis and played drums in his high school band. Isolated in a small town, alias found no music that captivated him until at age 13 when he saw "Yo MTV Raps." Alone in his interest in hiphop, alias sought to immerse himself in this foreign counter-culture. He bought The Source monthly at the one shop in Maine that carried it, and by age 14 he was writing his own raps. In support of his new found passion, his parents bought him a drum machine for Christmas, and alias rapped over his own beats in the privacy of his bedroom, too shy to share his rhymes with anyone.

However, in 1993, upon meeting sole, who was already recording and doing shows, Alias began rapping in ciphers at parties. He moved his "studio" from his bedroom to a friend's basement where he taught himself to use an MPC 3000 and an ADAT machine. In '96 he started doing shows with The Live Poets (sole's group) around New England.

December 22, 2018
If anyone is interested, I have copies of the EXTREMELY RARE "ALIAS: BITS & PIECES" #12/100 and a VERY RARE self-released(pre-barcode/6months distribution) "ALIAS: THREE PHASE IRONY...DOUBLE EP" listed for sale on ebay.
RIP Brendon. Your legacy will remain but you will be missed by many whose lives have changed for the better because of your music.
Reply Notify me Helpful

April 3, 2018
RIP to one of the best underground producers of all time
Reply Notify me 8 Helpful

April 3, 2018
Rest in Peace Alias.Thank you a lot for your music.
Reply Notify me 4 Helpful