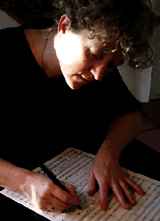 Roger’s research concerns the integration of improvisation to contemporary music. In that regard, she has worked with composer Marie Pelletier and composed music for the Ensemble Contemporain de Montréal and for Ensemble SuperMusique - the latter a shape shifting ensemble entirely dedicated to improvised music and "musique actuelle".