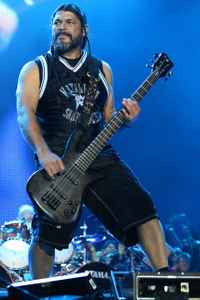 He grew up in Venice, California and was a standout among other local musicians. He played in a few local bands before joining Suicidal Tendencies in 1989, replacing the band's second bassist Bob Heathcote. His work with Suicidal Tendencies is considered to be outstanding, and he is responsible for adding in funk influences to the band seen prominently on albums Lights...Camera...Revolution! and especially on Art Of Rebellion. He eventually turned bandmate Mike Muir on to funk music, and the two formed Infectious Grooves to play more funk oriented music.

Although at times Trujillo has been known to use a pick, he prefers to use his fingers, like the late Metallica bassist Cliff Burton, but unlike Trujillo's predecessor Jason Newsted (who used a pick almost exclusively).

Robert Trujillo became Metallica's current bassist on February 24, 2003 after auditioning for Metallica and fitting right in with fellow band members James Hetfield, Lars Ulrich, and Kirk Hammett. The members of Metallica offered him $1 million up front, as an advance on the percentage he would earn by being in the band. The audition and hiring appear in the film Some Kind of Monster.
Sites:
Facebook, Twitter, instagram.com
Aliases:
Stymee
In Groups:
Black Label Society, Infectious Grooves, Mass Mental?, Medication, Metallica, Project Tru, Suicidal Tendencies, The Groovalistic All-Star Back-Up Choir
Variations:
Viewing All | Robert Trujillo
R. Trujillo, R.Trujillo, Rob Trujillo, Trujillo

Artists and Bands I Like and Recommend by Andrew_Lawson
Best Bassists! by pamasso1234
Seen live (596 and counting..) by tero_risti
Great Bass Players by markm65
View More Lists →