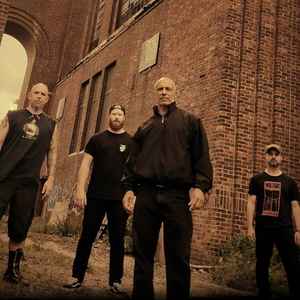 Though they began playing music in a style akin to instrumental art rock, a move into violent power electronics in the mid 1980s set Controlled Bleeding on a course that would take them through industrial, ambient, free jazz, noise, dub, progressive rock, sacred music, dark ambient, classical and musique concrète. To their detriment, the group was not concerned with generating or maintaining an audience, relying instead on spontaneous inspiration - often the cause of alienation amongst many of their listeners.

The band's only constant member is Paul Lemos, although early band members included Jack Salerno, Dave Southerland, Gary Pecorino and Tony Meola, a stable line-up was not attained until the early 1980s, with the addition of Joe Papa and Chris Moriarty.

Moriarty departed circa 1994, however he and Lemos continued to work together on side-projects such as Joined At The Head, Skin Chamber and Fat Hacker, whilst Lemos and Papa pursued further sonic experiments with Controlled Bleeding, as well as releasing music under their own names. After the deaths of both Chris Moriarty and Joe Papa in the late 00's, original member Tony Meola re-joined the band on drums. The current guitar-and-drums version of Controlled Bleeding plays instrumental rock songs influenced by Krautrock (notably Can) and progressive rock.

June 22, 2022
For me, Controlled Bleeding were a revelation and a revolution. I first heard them on the WaxTrax! Black Box compilation. At the time, they were one of many bands on that label that I only knew one song from. Then one day, I was playing around with Pandora and decided to create a station of the band...

The first track that came on was Side A of "Knees and Bones." While I had listened to some strange and weirdly interesting music, I had never even considered that "noise music" even existed. It was my first sojourn into digging deeper into what this weird and wonderful band were about, as well as noise in general.

I will admit that I was a little confused when I next picked up "The Poisoner," which sounds like a boat ride into a dark alternate dimension. Then I grabbed the "Before the Quiet" compilation and realized that I was hooked. It didn't matter what style of music Lemos, Moriarty, and Papa (along with many others who contributed) had created with a given release; to me, it all was pure gold!

CB are one of the most influential bands to me! Their styles are diverse and eclectic, but they create the most fascinating and unique music I've heard in my life. It doesn't matter which era of it you listen to, you will always feel entertained yet also out-of-sync with reality at the same time. I will forever be thankful to Paul Lemos and Controlled Bleeding for their output and influence!

(On a more personal note, having mostly created electronic pop music myself up until I heard "Knees," listening to CB spurred me to work on more experimental works of my own and dig deeper into "what makes audio interesting." CB literally changed my life!)

January 18, 2020
CB need more recognition. one of the best hidden gems of the music world . just about everything I like by them .whatever they do its creatively worked out.

November 20, 2016
Totally agree! Paul also happens to be one of the nicest human beings one is ever going to meet. Totally schizophrenic in musical styles, CB is certainly one of the most unique. They should be more well-known, but on the other side of the coin they are a huge cult band. Great indeed!! ;)

I can't spend enough words to praise and recommend one of the most original, versatile, prolific, inspired and unpredictable bands of the last 40 years. Controlled Bleeding, in the classic line-up featuring Paul Lemos, Christ Moriarty (R.I.P.) and the heavenly vocals of Joe Papa (R.I.P.), did record some truly astonishing pieces of music. From the slaughtering industrial noise holocaust of "Knees And Bones" (easily one of the quintessential industrial albums out there), to the progressive rock / meditative instrumentals of "Songs From The Drain" and "Music From The Scourging Ground", passing through the crazy multi-faced "Core", the dark and apocalyptic "Halved" and "Curd" (featuring another industrial masterpiece called "Break/Curd", which surely inspired a lot of people - BDN anyone?), the solemn, symphonic and jazzy "Music For Gilded Chambers", and delivering more classics into industrial metal and EBM, with the fantastic "Trudge" and the heavily guitar-driven "Penetration".
Can't wait to listen to their forthcoming new album, finally hoping to catch them on stage somewhere in Europe! Go, Paul, go!