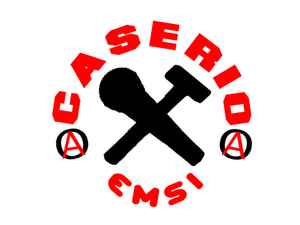 Profile:
emsi Caserio is a militant rap project born in the last months of 2012. It originates from the re-encounter of Lele, Ross and Alex, childhood friends who found themselves reunited in the notav demonstrations in Val Susa, after more than 10 years. Music and lyrics are by Lele, who writes and produces rap since 2002. After a long break dedicated to aptitudinal and compositional research, the collaboration with the Blazingloop Team (Roma / Treviso) leads to the birth of a bunch of new tracks, presented under the pseudonym of Lele B.One. This name was later changed into emsi Caserio because of the desire of underlining the political and cultural connotation of the project . This new project brings new artistic input and in January 2013 comes out the free downloadable demo, characterized by a strong social and political content and a heavy anarchical inspiration. Lele and Ross, now based in Asti at the occupied former Mutua, are producing and working on a number of new projects with the technical support of the equipment found in the social space of the occupied building. The first auto-produced CD is under construction, there will be loads of collaborations with groups of the militant rap scene. Stay tuned!