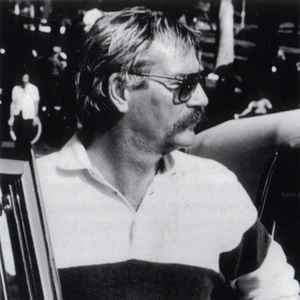 Reid Miles was born in Chicago on 4 July 1927 but, following the Stock Market Crash and the separation of his parents, moved with his mother to Long Beach, California in 1929.
After high school Miles joined the Navy and, following his discharge, moved to Los Angeles to enrol at Chouinard Art Institute.
After working in New York in the early 1950s for John Hermansader and Esquire magazine, Miles was hired in his own right around 1955 by Francis Wolff of the jazz record label Blue Note to design album covers when the label began releasing their recordings on 12" LPs. Miles designed several hundred covers, frequently incorporating the session photographs of Francis Wolff and, later, his own photographs, although many of his later designs dispensed entirely with photographs.
Miles wasn't particularly interested in jazz, professing to have much more of an interest in classical music, but used the descriptions of the sessions relayed to him by producer Alfred Lion to create the artwork.
Lion's retirement as a record producer in 1967 coincided with the end of Miles' connection with Blue Note. "Fifty Bucks an album...they loved it, thought it was modern, they thought it went with the music...one or two colors to work with at that time and some outrageous graphics!".
Variations:
Viewing All | Reid Miles
Miles, Red Miles, ReiD K. Miles, Reid, Reid K. Miles, ReidK. Miles, Reis K. Miles