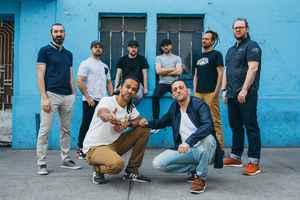 Real Name:
Dub inc
Profile:
Dub inc has toured all over the world for many years, regularly playing in front of tens of thousands of spectators, setting the stage ablaze in the largest European and French festivals, thrilling South American and Indian audiences alike. Their videos get hundreds of thousands of views in daily, and they are followed on social networks by more than six hundred thousand fans.
Blending Reggae, Dancehall or world music, Bouchkour and Komlan embody the band's voices in styles as different as they are complementary. They pass on a universal message whether the language of their song is French, English or Kabyl (an algerian language) insisting on how important mixed race and the mixing of styles are.
The Saint-Etienne based musical group have never sought a particularly mainstream exposure; they went their own way, building their discography with passion, talent, and focus. Perhaps that is why they have been for now twenty years the best ambassadors of French reggae across the globe.
Sites:
dub-inc.com, Facebook, instagram.com, YouTube
Members:
Aurelien Komlan Zohou, Frédéric Peyron, Gregory "Zigo" Mavridorakis, Hakim "Bouchkour" Meridja, Idir Derdiche, Jérémie Gregeois, Moritz "Da Baron" Von Korff
Variations:
Viewing All | Dub Incorporation
Dub Inc, Dub Inc.