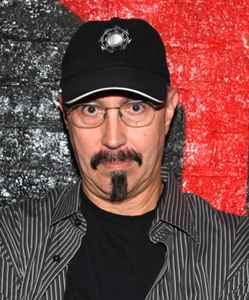 Real Name:
John Morales
Profile:
In 1975, while being DJ for a few years in local Bronx clubs, John Morales realised that he wanted to make some of his records last longer in time, back then most were in the 3/4 minutes range... So by use of his TEAC 71/2 and a box of razor blades John started splicing tape for endless hours and so became most probably one the first DJ to create the 'extended mix' (or 'remix' in its original form). In doing so he realised also that he could achieve a similar thing by cutting, slicing and taping parts from different recordings and so was born the basis for his (deadly) medleys. John says "I can still see the 100's of edits zoom by every-time I play the tape". John Morales started to release some of his reel to reel edits, medleys and remixes to Acetate via the Sunshine Sound (a NYC studio where DJ's could bring their reel to reel tapes and have acetate copies cut one at a time), so that he and later anyone could play these tracks at clubs. Greg Carmichael gave him his first mixing job after hearing some of his Sunshine Acetate mixes and these first two official mixes made him famous: 'Dance and Shake Your Tambourine' for Universal Robot Band and the classic from Inner Life: 'I'm Caught Up". However many of his early mixes and edits, even officially released, were and remains uncredited and so might not appear in his discography ! John has been working for numerous of acts and has been involved in over 500 songs. Both on his own and as part of John Morales & Sergio Munzibai (M & M Productions) with Sergio Munzibai. John Morales is truly one of the most crucial originator of the extended mix, remix and re-edit idea, anyone in that field own him tribute.
Sites:
johnmoralesmix.com, djjohnmorales.wordpress.com, Facebook, Facebook, Twitter, MySpace, plus.google.com, bbemusic.com, disco-disco.com, discomusic.com, Wikipedia, SoundCloud, mixcloud.com, YouTube
In Groups:
John Morales & Sergio Munzibai, Spencer Morales
Variations:
Viewing All | John Morales
J. Morales, JM, John, John A. Morales, John Marales, John Morales (An M&M Mix), John Moralis, Johnny Morales, Jon A. Morales, Jon Morales, M&M, Magules, Morales