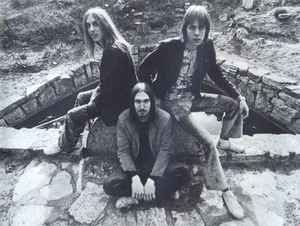 Profile:
Born out of the late-1960's Berlin underground scene, Ash Ra Tempel were rooted in a succession of beat and blues bands, including: Bluebirds, The Bomb Proofs, Bad Joe, and Steeple Chase Bluesband. The latter were transformed entirely when Klaus Schulze from Tangerine Dream met up with them becoming Ash Ra Tempel. The trio of Klaus Schulze, Manuel Göttsching and Hartmut Enke decided to abandon conventional composition and song writing, in favour of free-form improvising and developing a new musical language. As such, they became notorious for jams that could exceed 30 minutes (some such recordings can be found on The Private Tapes releases).

Ash Ra Tempel went to Hamburg in March 1971 to record their debut, with the aid of top engineer Conny Plank. A Krautrock twist on the space-rock music as pioneered by Pink Floyd and Hawkwind, with elements of both yet devoid of songs. One track per side: the power-drive storming "Amboss" and the shimmering timeless "Traummaschine". A yin-and-yang type concept that was followed on further albums. After this only the core of Göttsching and Enke remained constant for a while, with lots of other musicians passing through the band. Songs also featured on some, notably on "Schwingungen" which had psychedelic blues numbers on one side and a deep space trip on the other, and the similarly balanced "Seven Up" collaboration with acid guru Timothy Leary. Other related "super-sessions" that were born out of this "Cosmic Couriers" collaboration idea included albums with Sergius Golowin, Walter Wegmüller and The Cosmic Jokers.

Later, only Manuel Göttsching kept the band-name going, with the duo project "Starring Rosi" and the cosmic guitar album "Inventions For Electric Guitar" after which Ash Ra Tempel were re-branded as Ashra.