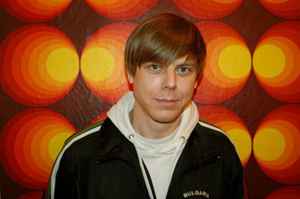 February 24, 2021
Patric Catani was one of the masterminds of Breakcore, Industrial Hardcore and general weird Experimental outings in the 90s. Starting on an Amiga 500, wave after wave of insane sampling was unleashed on the listener, Grindcore, Pop Music, Jungle, Ragga, Chiptunes - everything underlined with punching Gabber drums and / or overly distorted Breakbeat loops. With aliases such as Eradicator, Ec8or, Test Tube Kid, E-De Cologne he released on most of the important labels of that era such as Praxis, Fischkopf, DHR, Mono Tone...

Under his alias E-De-Cologne, Patric Catani was a true pioneer of Hardcore. He set the path for his own style of harder music, which was more fierce and less melody-based than most of the more known "Gabber" of that time, with his distinct way of sampling from a multitude of source, Thrash Metal, Acid, Disco and Pop music and everything else, creating a killer mixture of sounds. Both relentlessly hard, but not without humor and an overdose of fun.

He was admired and did inspire plenty of artists that came after him in a variety of genres, including artists in the Breakcore, Speedcore or Experimental Hardcore genres.

An important piece in the history of hard sounds, and a showcase of sheer euphoric sonic experimentalism.

Eradicator and Test Tube Kid were two of the most interesting side projects of Patric Catani. He really took Experimental Hardcore to a new level with these sounds. Influences from a variety of genres woven together masterfully.

Underground Version of Alec Empire.
Nice Producer and Avangardist of Minimal/Electronica/Chiptune/Breakcore-whatever.
Highly recommendable, sympathic Scene Producer!
The work he did for the Electric Ladyland Series, belongs to the highlights in that great compilation!