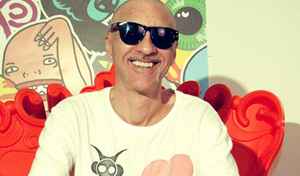 Real Name:
Carlos Slinger
Profile:
DJ Soul Slinger is a pioneer of electronic music in the US. As the founder and creative head of Liquid Sky Music and Liquid Sky D-Sign, he has been responsible for some of the most forward-thinking music and clothing to emerge from the New York City underground over the last several years. In 1994, he released the Jungle Liquid Sky/Ethiopia 12", the first release on Jungle Sky Records, and the first drum and bass record by a US producer. The second 12", Abducted/Jungle Bossanova, is now a classic, and inspired an entire album of remixes (Missing Time - The Abducted Remixes). Since then, he has released several singles, such as the seminal Diana/Theresa white label with DJ Wally, as well as appearing on every one of the This Is Jungle Sky compilations. In 1997, Soul Slinger released his first full-length album, Don't Believe, a record of surprising diversity and genre-hopping. While Don't Believe is a reflection of Soul Slinger's production skills, Upload, his continuous mix CD, is a display of what he can do to move the dancefloor. Soul Slinger's unique blend of hip-hop, drum and bass, illbient, latin, and other influences. In the past few years, he has emerged as one of the most popular and sought-after drum and bass DJ's. While Soul Slinger generally appears by himself, SUPA MC TC Izlam of the Zulu Nation also frequently accompanies him. Soul Slinger has also collaborated at jazz festivals with artists such as Bill Laswell, Elliott Sharp, and Derek Bailey.
Sites:
Facebook, Facebook, SoundCloud, SoundCloud, SoundCloud, MySpace
Aliases:
Alien Mind
Variations:
Viewing All | DJ Soul Slinger
C.Slinger, Carlos, Carlos "Soul Slinger", Carlos "Soul" Slinger, Carlos 'Soul Slinger', Carlos 'Soul' Slinger, Carlos Slinger, Carlos Soul Slinger, Carlos'Soul Slinger', Carloz Soulslinger, D.J. Carlos "Soul" Slinger, DJ "Soul" Slinger, DJ SoulSlinger, DJ Soulslinger, Dj Soulslinger, Soul Slinger, Soulslinger