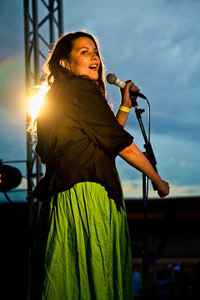 Tyra Hammond is most well-known for her work in the band Opensouls where she shone as their soulful powerhouse vocalist. This ran alongside a steady stream of collaborations with the likes of Scribe, Ladi6 and more recently Young, Gifted and Broke associates The Side Steps Quintet and Peace.

2013 saw Tyra embark on her own journey with the release of her first single 'Stop Messing Round', co-written and produced by Jeremy Toy (Opensouls, She's So Rad, the Sami Sisters), and the accompanying NZ On Air funded video following shortly. Tyra's distinctive original sound effectively combines her soul, hip hop and old school R&B influences with a voice that is both stirring and powerful.

Tyra's next single is set for release in the coming months with an EP to follow in early 2014. Tyra shares "I am so excited about releasing my upcoming EP. I now have the confidence in my voice and my ideas to move forward with a solo career, drawing on my life experiences and creative influences to create my first solo work."
Sites:
Bandcamp, Facebook, SoundCloud, Twitter
In Groups:
Opensouls, Sheelahroc
Variations:
Viewing All | Tyra Hammond
Jeremy Toy, T. Hammond