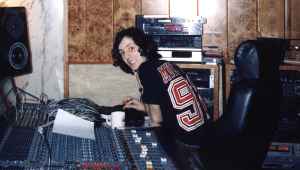 Real Name:
Cem Oral
Profile:
Born as a son of a Turkish father, a Finnish mother and with German citizenship, Cem Oral was never far away from diverse music. Starting musical experiments in the teen years with 4-track-recorders and synthesizers he entered his career as a producer with working as an audio engineer for several years, then as producer for several Hip Hop and Pop-acts like B.V.S.M.P. and George McCrae. At the same time he was already releasing records on Alfred Hilsberg's avant-garde-label "What's so Funny About". Then there was the time to stop working for other artists at all and focus the own ideas, as the commercial music scene was not the place to be anymore.
"Jammin' Unit", Cem Oral's main project and stands in the tradition of Dub-production. Being influenced by dub heroes like King Tubby and Perry as well as early electronic music pioneers, he is one of the few electronic music producers that develops his music beside the commercial tracks of techno and pop music. This may be the reason for being requested so much for film music (see the "Wrapped Reichstag" Documentary movie '96 or the Japanese Future-art Film "Synthetic Pleasures") and remixes of experimental groups like "Can" or "Die Haut".
Sites:
jamminmasters.de
Aliases:
Cem Oral, Der Tote, DR. Echo, Free Radicals, G 104, Oral Experience, Oral-X, The Message (2)
Variations:
Viewing All | Jammin' Unit
Jamin' Unit, Jammin Uint, Jammin Unit, Jammin'Unit, Jamnin Unit, The Jamin' Unit, The Jamin'Unit, The Jammin Unit, The Jammin' Unit