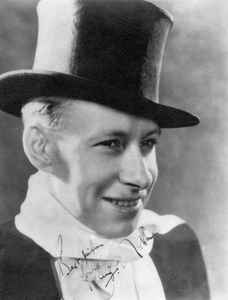 Noble is most notable as the composer of many famous songs such as "The Very Thought of You," "I Hadn't Anyone Till You," "The Touch of Your Lips," "Goodnight Sweetheart" and "Cherokee." He studied music at the Royal Academy of Music and, at age 21, became a staff arranger for the BBC and a year later was named a musical advisor for His Master's Voice (HMV) Records. In 1929, he became conductor/leader HMV's house band, known as the New Mayfair Orchestra. This orchestra featured members from many of the top hotel orchestras of the day. The most popular vocalist with Noble's studio band was Al Bowlly, who joined Noble in 1930. Ray Noble's band recordings were the first by a British ensemble to achieve popularity in the United States, and in 1934 he journeyed to America, along with drummer/manager Bill Harty and vocalist Al Bowlly. Noble enlisted American bandleader/trombonist Glenn Miller to help him organize a band in America. The band achieved success, especially during its engagements in The Rainbow Room, but it never reached the level of its British counterpart, and was disbanded in 1937.

Noble went to Los Angeles, where he conducted an orchestra on the radio and provided music for shows like 'The Chase and Sanborn Hour,' 'Burns And Allen' and the 'Charlie McCarthy Show,' (featuring ventriloquist Edgar Bergen). He also did some comedy on the radio during this time and worked extensively with Fred Astaire. Noble also made a lot of recordings with his band on Brunswick and Columbia from 1937-1950 and worked with artists like Tony Martin (3) and Buddy Clark (3). In the mid-1950s, Noble decided to enter semi-retirement and relocated to Jersey (Channel Islands) in the late 1960s. In March 1978 he flew to London for treatment of cancer, and later died of the disease at a London hospital.