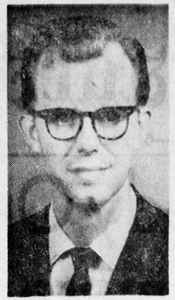 Real Name:
Frank Robert Shallenberg
Profile:
F. Robert Shallenberg (1930–2005) was an American avant-garde composer and music educator, a founding director of the University of Iowa Electronic Music Studios (1963–68), father of an audio-book producer Kara Shallenberg and grandfather of a mandolinist Chris Thile. He was born in Oklahoma and had been playing clarinet in a jazz big-band before pursuing an academic career. Shallenberg studied composition with Milton Babbitt and Kenneth Gaburo and received his BMus/B.M.E. degrees from Phillips University, as well as an MMus degree from the University Of Illinois. In 1962, he became an assistant professor of music at the Illinois Wesleyan University. Robert also continued his doctoral studies at Urbana-Champaign, where he wrote a thesis on "Aspects of pitch emphasis in some twelve-tone works of Arnold Schoenberg" and received a Ph.D. degree in 1963.

After joining the University of Iowa's College of Liberal Arts and Sciences as an assistant professor in 1964, Shallenberg became the director of a recently-established Electronic Music Studios. He left for Indiana University four years later, where Robert was appointed an assistant director of Iannis Xenakis's Center for Mathematical and Automated Music (CMAM). Shallenberg had been teaching acoustics and other theoretic courses at Bloomington till 1972.

As a composer, F. Robert Shallenberg wrote a few atonal, twelve-tone and serialist works, including String Quartet (circa 1956), Herbsttag, and Divisions for Small Orchestra (1963). One of his tape recordings were buried in a time capsule at Illinois Wesleyan University from 1966 until 2011.
Sites:
robertshallenberg.tumblr.com, archive.org
Variations:
Viewing All | Robert Shallenberg
Shallenberg