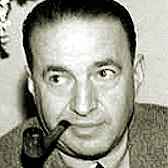 Real Name:
Gustav Gerson Kahn
Profile:
Lyricist Gus Kahn was born in Koblenz, Germany on November 6, 1886. Immigrating to the United States in 1891, where his family settled in Chicago. After graduating from high school, he worked as a clerk in a mail order business before launching one of the most successful and prolific careers from Tin Pan Alley.

In his early days, Kahn wrote special material for vaudeville, together with Egbert Van Alstyne and at the age of 20, his first song was published, “My Dreamy China Lady”. From that publication through the 1940’s, Kahn contributed to Broadway scores such as Kitty’s Kisses, Whoopee, Show Girl, Sinbad, Passing Show of 1922 and Greenwich Village Follies of 1923. Concurrently, he wrote several hits for films, primarily MGM produced features. By 1933, Kahn had become a full time motion picture songwriter contributing to Flying Down to Rio, Kid Millions, Thanks a Million, A Day at the Races, Everybody Sing a.o.

In 1916 he married Grace LeBoy and they had two children. He is also the grandfather of Gwynne Kahn.

Kahn passed away in Beverly Hills, California, on October 8, 1941.