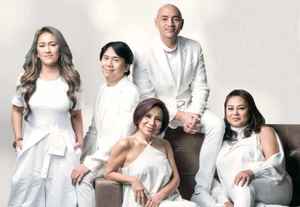 Real Name:
The CompanY
Profile:
The Company (stylized as The CompanY) is a Filipino vocal group. Its current members are Moy Ortiz, Annie Quintos, Sweet Plantado and OJ Mariano.

The original members of The CompanY were members of the 1981 and 1983 touring batches of the Ateneo College Glee Club. Their musical director, Moy Ortiz, named the group after Stephen Sondheim's musical Company. The group focused on contemporary jazz and a cappella music, instead of songs from the classical and traditional choral that they performed under the ACGC.

The CompanY scored their first hit with the single Everlasting Love, which Ortiz co-wrote with Luigi de Dios and Rina Caniza. This was followed in 1992 by two other hits,“Muntik na Kitang Minamal ("I almost loved you") and “Now That I Have You,” from their second album Sixby6. That same year, The CompanY performed at their major concert with the Manhattan Transfer at the Araneta Coliseum.

In 2014, The Company welcomed OJ Mariano as their newest member, replacing Jay Marquez.
Sites:
Facebook
Variations:
Viewing All | The Company (30)
The CompanY