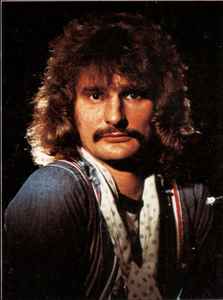 Real Name:
David Garrick
Profile:
David Byron (29 January 1947 - 28 February 1985, born as David Garrick). British singer and songwriter best known for fronting Uriah Heep. He was lead vocalist for Spice (15) (an early incarnation of Uriah Heep) from 1967 to 1969. From 1968 he also worked as a session vocalist working at City of London Studios and PYE Studios for Avenue Recordings. His early work for the budget label was all cover versions and all uncredited. He is purported to have recorded over one hundred and forty of these cover version tracks between 1968 and 1970. The rapid rise in fame of Uriah Heep put an end to the session work.

His wellknown alcoholism (that took his life, aged 38) finally got him sacked from Uriah Heep in July 1976. By that time, he'd already released a solo album, Take No Prisoners (1975), and three years later he released another one, the 1978 Baby Faced Killer. Inbetween, he'd teamed up with Clem Clempson and Geoff Britton as Rough Diamond who released a selftitled album in 1977 to little or no attention. They toured in spring that year with Peter Frampton. In 1981, Uriah Heep had hit rock bottom and toured in clubs for a few hundred in the audience, and Byron was offered to re-join the band but refused.
Sites:
travellersintime.com, davidbyron.net, Wikipedia, Wikipedia, rockzirkus.de
Aliases:
David Garrick (2), Mark Oxford
Variations:
Viewing All | David Byron
Bron, Bryon, Byrion, Byron, ByronThain, D. Byron, D. John Byron, David, David John Byron, Davis Byron, Байрон, Д. Байрон