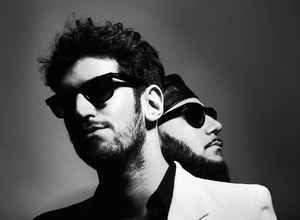 Profile:
Chromeo is Dave One and Pee Thugg, also known as David Macklovitch and Patrick Gemayel. Two best friends that have been doing music together since they were kids. Before establishing themselves as a band, Chromeo were making beats for well-known Québec hip-hop acts such as Shades Of Culture, Dubmatique, Sans Pression and Yvon Krevé.

In the summer of 2000, Tiga, a fan of Obscure Disorder, stepped to Dave and asked him if he was interested to do an electronic music project on Turbo. In 2001 were signed by Turbo when they finally put together a demo.