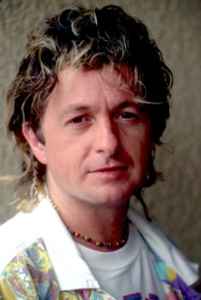 Real Name:
John Roy Anderson
Profile:
Distinctive vocalist and lyricist best known as frontman of Yes and for his collaborations with Vangelis.

He was born as John Roy Anderson on 25th October 1944 in the town of Accrington, Lancashire, England, his parents being Albert and Kathleen Anderson. (He was later to drop the "h" from his first name.) He attended St. John's Infants School in Accrington, and made a tentative start to his musical career at an early age by playing the washboard in "Little John's Skiffle Group", which played songs by Lonnie Donegan among others.
Anderson left school at the age of fifteen, and went through a series of jobs including working as a farm hand, a lorry driver, and a milkman.
In 1962, Anderson joined The Warriors (also known as The Electric Warriors), where he and his brother Tony shared the role of lead vocalist. He quit this band in 1967, released two solo singles in 1968, and then in the same year briefly sung in a band called The Gun.
In the summer of 1968, Anderson joined a group called Mabel Greer's Toyshop, which also included bassist Chris Squire and guitarist Peter Banks. Anderson fronted this band, but ended up leaving again before the summer was over. Anderson, Squire, and Banks went on to form Yes, with drummer Bill Bruford and keyboardist Tony Kaye. Their debut album was released in 1969.