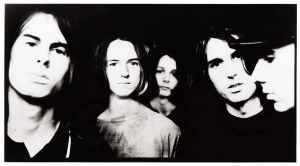 Formed in Reading in 1987 by Andrew Sherriff (b. 5 May 1969, Wokingham, England; guitar/vocals), Stephen Patman (b. 8 November 1968, Windsor, Berkshire, England; guitar), Simon Rowe (b. 23 June 1969, Reading, Berkshire, England; guitar), Jon Curtis (bass) and Ashley Bates (b. 2 November 1971, Reading, Berkshire, England; drums), Chapterhouse took the unusual step of rehearsing and gigging for well over a year before recording even a demotape. Initially lumped in with the British acid rock scene of the time, a mistake hardly rectified by the band's early performances supporting the rather laidback Spacemen 3. Chapterhouse eventually escaped from one genre only to find themselves thrust amongst the infamous "shoegazer" groups of 1991 (with Lush, Moose and Slowdive), so called because of the bands' static live shows and insular music. Bassist Jon Curtis left early on to study, being replaced by Russell Barrett (b. 7 November 1968, Vermont, USA) who also fronted his own garage band, the Bikinis. Chapterhouse eventually signed to the newly-formed Dedicated label, releasing a series of lavishly-acclaimed singles, including Pearl, which reached the UK Top 75, and which revelled in distorted melodies and attracted a healthy following, while the autumn of 1991 saw the band aiming their sights on the anticipatory American market.

September 14, 2020
Reading the band profile, it's amusing to see Spacemen 3 described as 'rather laid back', bearing in mind the ferocity of tracks like 'Revolution' and 'Take Me To the Other Side'. The connection between the two bands was their manager - Gerald Palmer - and Chapterhouse supported Spacemen 3 a number of times circa 1989.

Incidentally, was Russell Barrett *really* born in Vermont, or was that just some press blindsiding on his part? He actually grew up in the Birmingham area.