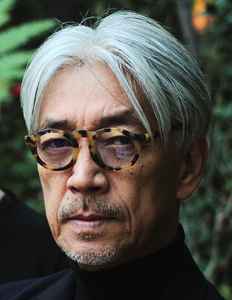 Real Name:
坂本龍一 (Sakamoto Ryuuichi)
Profile:
Ryuichi Sakamoto (born January 17, 1952 in Tokyo, Japan) is a Japanese musician, composer and actor. Sakamoto studied at the Tokyo National University of Fine Arts and Music, where he graduated with a BA in composition, and a Master's degree with special emphasis electronic and ethnic music. Sakamoto began his career in the mid 1970s, working as a composer, arranger and producer with some of Japan's most popular rock, jazz and classical artists. He released his first solo album in 1978 but came to fame as a member of Japanese synth-rock outfit Yellow Magic Orchestra with co-founders Haruomi Hosono and Yukihiro Takahashi. He collaborated with David Sylvian on a number of singles and most of Sylvian's albums. He appeared in the 1983 Nagisa Oshima film Merry Christmas, Mr Lawrence alongside British rock singer David Bowie; he also wrote the film's musical score. He won the Academy Award for his score to the 1987 Bernardo Bertolucci film The Last Emperor. He has also written soundtracks for Pedro Almodovar's film High Heels, and Oliver Stone's Wild Palms. Sakamoto was married to a Japanese pianist and singer Akiko Yano, collaborating with her on some of her recordings. He is also known as a critic of copyright law, saying it is antiquated in the information age. He is battling stage 4 cancer at the moment

April 18, 2022
Ryuichi Sakamoto produced so many timeless scores, albums and piano compositions over the years. At 70, he is still one of the most talented and prolific composers on the planet. Sakamoto was recently quoted as saying "I haven’t left any piece of music that changed music history" but I beg to differ. Merry Christmas, Mr Lawrence, his universally acclaimed piano composition, is one of many revolutionary works by the Oscar, BAFTA, Grammy and Golden Globe winning composer. Sakamoto was also a recipient of a Lifetime Achievement Award at the 2016 World Soundtrack Awards.

I love Sakamoto's electronic, synthpop and experimental productions the most. I recommend the Yellow Magic Orchestra albums YMO and BGM, solo albums B-2 Unit and Async and my all-time favourite Sakamoto track Bamboo Houses, a collaboration with Japan's David Sylvian. I made a Spotify playlist Ryuichi Sakamoto - Living Legend which compiles all my favourites.

The Ryuichi Sakamoto documentary Coda (2017) was great but I would love to learn more about his early releases and influences. Sakamoto published an autobiography in 2009 titled Musik Macht Frei (Music Sets You Free) in Japanese and Chinese. Hopefully, the book gets translated into English. If you are aware of any other English biographies about Sakamoto or YMO please let me know.
Reply Notify me 4 Helpful