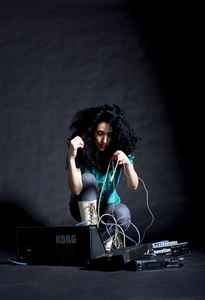 Real Name:
Leila Arab
Profile:
Moving from a supporting keyboard role with Björk and Galliano to put out her own album on Aphex Twin's Rephlex Records, Leila is the rare female electronica songwriter who doesn't sing, choosing instead to use vocals from friends -- and even her own sister -- for her Like Weather long-player. Born in Iran, she spent part of her childhood there but was forced to flee to London with her family. She became interested in DJing as well as keyboards, and left college to play with Björk on her first album, 1994's Debut. Leila graduated to sound engineer for the second Björk LP, and began setting up her own home studio. Signed to Rephlex Records for a solo album, she released the single Don't Fall Asleep in 1997 and the Like Weather album the following year. Love Story and the Sodastream single appeared in 1999. The following year, Leila released her moodier second album, Courtesy of Choice, on XL. Shortly after that album's release, Leila's mother died, and she coped with her grief by touring and doing mixing work for Björk. She didn't return to music until her father also passed away, and enlisted her friends and family to help with her third album. In spring 2008, it was announced that she'd signed to Warp Records; a pair of singles, Mettle and Deflect, heralded the arrival of Blood, Looms and Blooms, which was released that summer. For 2012's U&I, Leila collaborated with Mt. Sims, who helped her take her music in a darker direction influenced by punk and hard-edged techno.
Sites:
Facebook, SoundCloud, warp.net, instagram.com, MySpace, Bandcamp
Aliases:
Grammatix, Leila Arab, Little Miss Specta
Variations:
Viewing All | Leila
ليلا