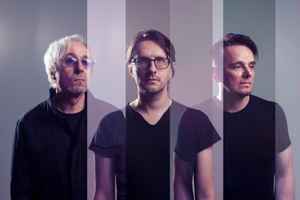 Profile:
English progressive rock band founded in 1987 by Steven Wilson in Hemel Hempstead, Hertfordshire. Originally a pseudonym for Wilson's solo recordings, in 1993 the project mutated into a full band with the inclusion of Colin Edwin, Chris Maitland and Richard Barbieri. Maitland was replaced by Gavin Harrison in 2002 and the line-up remained the same until 2010, when the band went into hiatus.

In November 2021 the band officially return as a three-piece lineup comprised of Wilson, Barbieri and Harrison, releasing the new single "Harridan". The band's eleventh studio album Closure / Continuation, their first in 13 years, is released in June 2022.

December 24, 2018
An excellent band its Christmas eve here in England and its raining Im listening to this bands whole catalogue of music on cassete and cd NO DOWNLOADS
See 2 replies

May 14, 2018
Best to leave labels out of it: PT are/were(?) a rock band, plain and simple. I don't know what the word "progressive" could possibly mean when speaking of music (any music). Were the Doors progressive? Musicians play a style that suits them, and then maybe change that style over time (or not). The changes, when they happen, are not "progressive": it's just a change of style. Looking back to the 1970's, when all this started, I think a lot of people used the word "progressive" to mean "bombastic", or was that just King Crimson? Some of SW's songs are very moving and that's all that matters: e.g. "Buying new soul", but there are many others.
See 5 replies

May 10, 2018
May be interesting: the german collectors' magazine Oldie Markt has started a many-part worldwide discography and story about Porcupine Tree and all members. The first five parts are out now. Seems very detailed. You can take a look here: http://www.bielekat.info/om-mag/om-03-18-fb/index.html

I recently read on Wikipedia that Fripp thought Prog Rock should have died when King Crimson broke up. Fripp and other music "experts" on same article mention how Prog Rock became so derivitive and if it couldn't "progress" ... then it should die. So why then did Fripp collaborate with SW? All I know is that when I found Porcupine Tree and SW music, it gave me a reason to live again in today's world of (mostly) garbage pop music. There is so much innovation in SW's work and I am emotionally moved by this epic music. I won't try to understand the mind of Fripp, but the [professions of] music critics and music experts are what should die. Prog Rock fans and consumers are blessed to know what greatness PT has delivered beyond Prog Rock, so much fusion of so many genres and styles. Truly great music put out there for all of posterity. This old guy's lovin it!!!

February 10, 2017
PT is more or less history. Altough there might be something in the future. But it has left a legacy behind them that few other band can achieve.

November 28, 2016
I cannot add anything to what has already been said below other than to say that I am mostly an ambient/electronica/modern classical enthusiast but I simply cannot,and will not,ignore the output of Steven Wilson et al.everything done by PT is outstanding.for me,they deserve the same revere as King Crimson,if not more.

March 18, 2016
Perhaps the most criminally under-appreciated band of all time? Tags such as 'prog rock' do this band a huge disservice; their music is extremely accessible and is only progressive when it needs to be. The band know the importance of strong melodies and song-craft over instrumental 'wankery' and is often just as much pop, heavy rock or psychedelic as it is 'progressive rock'. I honestly believe that Steven Wilson is one of Britain's finest songwriters of all time.

October 24, 2015
Not one single little sound is out of place in Porcupine Tree's records. Steven Wilson is a master of sound and emotion, putting every bit of work together exactly how it should be. He can make you feel however he wants. Porcupine Tree's entire discography is a magnum opus, even albums from back when it was only him and lots of DIY studio equipment. He knows how to carve the perfect music with the materials at his disposal.

April 20, 2009
Forget or leave aside all other progressive-rock bands like Dream Theater and such. Porcupine Tree is the most fulfilling band i have heard. If you check out their "Arriving Somewhere" DVD, you see that these guys are the most prominent band ever in the genre that also have nailed the 5.1 sound perfectly that pisses all over other concert releases.
The geeky but genius Steven Wilson is a brilliant songwriter who worked hard to lift the band up and forward. And the result has been astounding.
Porcupine Tree is also Britain's music industry best kept secret.
Check!!!