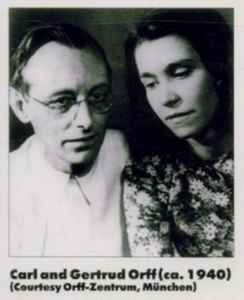 Profile:
Gertrud Orff (1914-2000) was a German music therapist. As a young woman, she devoted herself to Carl Orff and his music. She was first his student and from 1939 to 1953 his second wife. She was involved in the development of the Orff Schulwerk (school work), and later adapted the approach for work with disabled and developing children. Her first independent musical works came under the name Gertrud Willert-Orff. Four volumes were published from 1954 to 1959 titled "Kleine Klavierstücke" with her as composer. Her writings as a music therapist then appeared under the name Gertrud Orff, and have been published in German, English, French, Spanish and Japanese.
Variations:
Viewing All | Gertrud Orff
Gertrud Willert-Orff