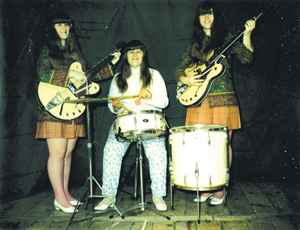 Profile:
The Shaggs were formed in Fremont, New Hampshire in 1965 by sisters Dorothy "Dot" Wiggin (vocals/lead guitar), Betty Wiggin (vocals/rhythm guitar), and Helen Wiggin (drums) at the encouragement and insistence of their parents.
In 1968/9 they recorded and released their debut full-length, Philosophy of the World on Third World Records. They were joined by their sister Rachel Wiggin on bass for the song, "That Little Sports Car." It defied the expectations of their parents, who said "imagine the girls to be inevitably bound for stardom", and they disappeared without a trace.
In 1975, the sisters again entered the studio although the death of their father/manager, Austin Wiggin, resulted in their not being published for years as well as the group's dissolution. Years after their break-up their debut was rediscovered and championed as an example of art brut/outsider music.
Sites:
Wikipedia
Members:
Betty Wiggin, Dorothy Wiggin, Helen Wiggin, Rachel Wiggin
Variations:
Viewing All | The Shaggs
Shaggs, The Shags

September 25, 2018
The Queens of Hipster Bands. If you like to waste good money on records that suck so that you can brag to your bearded friends in flanel out at the coffee shop, than this is your go-to band.
See 6 replies