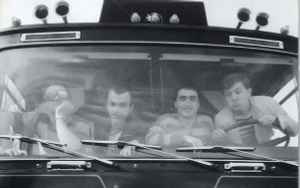 Profile:
Punk band from Lyon (France) active at the end of the 70's and during the beginning of the 80's. Starshooter disbanded in 1982 following their last show in West Side club in Lyon, closing french tour for their album "Pas Fatigué".
Originally a high school group with Kent, Jello and Phil named "Protostega Cryptochleidus", a name for dinosaur. It's after a party at the Lycée Saint Exupéry (Croix Rousse, Lyon 4) on 1975, June 6th with beginners Electric Callas and Marie and Les Garçons (all are in the same high school) and following a good public reaction to the chosen covers that they decide to call themselves "Starshooter", to integrate Mickey on the bass (Michel, a close friend of the band) and decided to compose their own song.
Aliases:
Les Scooters
Members:
Hervé Despesse, Jello (2), Kent (7), Mickey Snack, Phil Pressing

"Les Scooters" band name was used by Starshooter for a question of rights compare to their contract with Pathé Marconi. "Hygiène" (Sweet Jane) as a french cover of Lou Reed was issued on Skydog Commando compilation out on October 1978. First Starshooter record is "Pin-up Blonde" out in 1977.
In the same way, Bijou used band name "Pura Vida" to give the surfy instrumental "The Last Night" for Skydog Commando.

Startshooter had a kind of "yéyé" spirit in a punk shape.