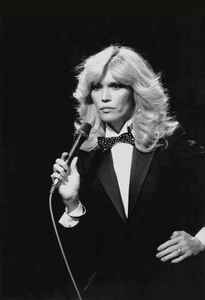 Real Name:
Amanda Tapp (or Tap)
Profile:
French model, singer, lyricist, TV host, actress and painter.
Contested facts about her biography include her birth date (cited as 18 November 1939, also 1941, 1946, 1948 and 1950) and place (Hong Kong, Saigon or Hanoi), the gender she was assigned at birth, names and nationalities of her parents (French-English father and an Asian-Russian mother), and the location of her upbringing.
She was raised in the South of France and moved to Paris to make a career in painting. She became a top model, a fixture of the mid 1960s Swinging London and one of Salvador Dalí's muses, who's said to have coined her stage name / public persona ("L'Amant de Dalí" - Dalí's lover).
She later posed as the "lady with the panther" in 1973 on the famous cover of Roxy Music - For Your Pleasure. After a brief affair, David Bowie advised her to try her luck as a singer. From the mid-1970s to the early 1980s, she was a million-album-selling disco queen, mainly in Continental Europe and Scandinavia, sometime referencing the allegations about her transgender identity in her songs "Fabulous (Lover, Love Me)", "If I was a Boy" or "I'm a Mistery" (deliberately misspelled as to reference the word "mister").
Since the early '80s she has presented TV shows in Italy, France and Germany and is a theater actress.
Sites:
amandalear.com, MySpace, Facebook, YouTube, Last.fm, Wikipedia, whosampled.com, Twitter, instagram.com
In Groups:
Chez Nous, Les Grosses Têtes
Variations:
Viewing All | Amanda Lear
A Lear, A. L., A. Lear, A.L., A.Lear, Amanda, Amanda Lear (Dali's Lover), Amanda Learo, Feat., Lead, Lear, Lear Amanda, Lear, A., Аманда Лир, אמנדה ליר - ארבלה, アマンダ・レア

July 27, 2019
hi - does anyone know why the 1985 'No Credit Card' Remix is not listed on her Discography Page - it's much better than the original - for Dancefloors - would anyone update her page?
Reply  See 1 reply Notify me Helpful

I fell in love with Amanda Lear nearly a year ago upon hearing the Laurent Wolf Mix of I Just Wanna Dance Again. I bought her first 7 albums on CD as well as her Greatest Hits, Follow Me.

I must say, her voice has a mysterious hypnotic-like quality to it backed with amazing instrumentation

Amanda is also a talented lyricist and co-writes nearly everything she records. A true talent.

I was thrilled when Amanda remixed and re-recorded her old songs. Even though I prefer the originals, the new versions shine just as good.

Amanda's last album Heart did suprisingly well in Europe. Amanda has released 2 CD singles a while back called "Paris By Night" and "Copacabana". Look out for them.

She is also not a man, nor was she one ever. Those were lies, she, David Bowie and Salvador Dali created to give herself more publicity. It worked!

December 10, 2003
Amanda Lear was said to be born as male and converted to "the other side" before her music career. Well in the end we'll never get to know if these transsexual rumours are true.

Besides she was a great disco vocalist, leaving some milestones in disco history.
Reply  See 1 reply Notify me 5 Helpful

FAVOURITE ARTISTS 1981 - 2021 by panis
Favorite International Artists by Antony_Lee
Favourite Artists by aSGmerlion
Artists for the Future by Milesbeet-hoven1
Most beautiful female artists... by KayX
BAD MUSIC #2 by yuiop90
my favorite artists by giovanni64
Women by Thedead
Favorite Artists by Simoom
Trans and Intersex Artists/ Songs about the same by elizabeththefirst
View More Lists →