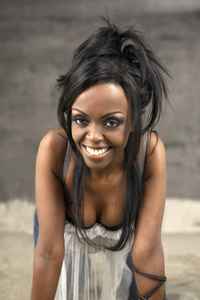 Real Name:
Sandra Chambers
Profile:
The talented Sandra "Sandy" Chambers, born in the United Kingdom, was one of the greatest voices of Eurodance in the 90's. She first joined the DWA (Dance World Attack) team as a backing vocalist. At that time, the DWA team included Italo-maestro Roberto Zanetti along his protégé William Naraine AKA Double You and Alessia Aquilani AKA Alexia. Sandra soon started doing her own solo sessions under the projects Netzwerk and Babyroots. In 1994 she released a single under her own name for the Lupomannaro label ("Everybody's Dancing"), followed by another one for DWA in 1995 ("Bad Boy"). The last one actually became a big hit in Europe and Canada. During that same year, she took over the vocals for two major dance acts, formerly featuring Giovanna Bersola AKA Jenny B.(who left the dance industry for a short period to do a jazz album): J.K. and Corona. These amazingly popular acts elevated Sandy to a new level, bringing her more and more jobs in the music industry. She sung and wrote music together with the Italo legends like Roberto Zanetti, Larry Pignagnoli, Davide Riva, Roberto Turatti, Alberto Carpani, Annerley Gordon, Clara Moroni and many, many others. During the mid-90s she took part in production of an incredible number of top quality Italo Dance tracks. She also launched a new career in jazz music, and did commercials for TV and radio.
Sandy left the Corona project in 1998. She had a baby and limited time left to release records. However, the new millennium resurrected her interest in dance music. Sandra started working for Roby Benvenuto's company, recording many dance tracks for markets other than Italian. Her new songs were published mostly on compilations. She established new connections with X-Energy team, doing tracks with Marco Benassi AKA Benny Benassi (from the world hit "Satisfaction").
Sites:
MySpace
Aliases:
Layla (8), Miss Bug (2), Robey B., Sandra Chambers, Sandy Chambers, Sense (8), Sharon Grand
Variations:
Viewing All | Sandy
Chambers, Dhany, San