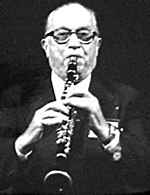 Profile:
Possibly the most famous 20th century klezmer musician was Dave Tarras, born Dovid Tarraschuk in 1897 in the Ukrainian shtetl Ternovka in Podolia. Already a professional musician at the age of 9, the descendant of at least two generations of Hasidic klezmorim played flute, mandolin, guitar and violin. He began playing clarinet at age 14.
In 1915, he was conscripted into the Tsar's army, but his talents as a musician kept him out of the trenches. Fleeing the pogroms in Ukraine, Tarras arrived in New York in 1921, where he worked in a garment factory for a time. Within a few years, he had become the new "King of Klezmer", usurping with his greater sophistication the position of Naftule Brandwein.
During his career he made literally hundreds of 78 RPM recordings and was one of the only traditional Yiddish musicians to make the transition to the post-war recording industry. Dave Tarras led his own ensembles at Jewish weddings and other festivities in the New York area and he was the favorite accompanist for Yiddish Theater stars like Aaron Lebedeff and Molly Picon. He died in 1989 in New York.
Sites:
Wikipedia
In Groups:
Boibriker Kapelle, Dave Tarras And The Musiker Brothers, Dave Tarras Orchestra, Dave Tarras Trio
Variations:
Viewing All | Dave Tarras
D Tarras, D. Taras, D. Tarras, D.Tarras, David Tarras, Tarras, with Dave Tarras, Дэйв Таррас, דוד טראס