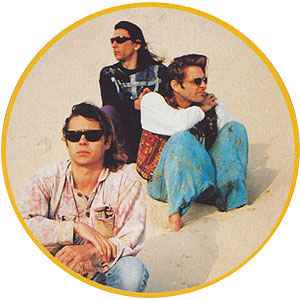 Profile:
Psy-Trance project formed in 1992 by 3 French producers. They became known for their first two goa trance albums from 1995 and 1996. In 1999 the group unexpectedly released a drum n bass / breaks album. Serge Souque left the group in 2000 and continued his career as The Antidote, an alias that was used for some Total Eclipse tracks in the '90s. Around the same time Total Eclipse became primarily a full on psy-trance project. Loïc Van Poucke left the project in 2004 leaving Stephane Holweck as the only remaining member for a while, but sometimes in recent years, he joined Stephane again and is currently part of the band.
Sites:
Facebook, SoundCloud, Bandcamp, Posterogs
Members:
Loïc Van Poucke, Serge Souque, Stephane Holweck
Variations:
Viewing All | Total Eclipse
T. Eclipse, Totale Eclipse

November 29, 2007
Total Eclipse are one of the true core originators of the genre we today refer to as goa trance. While they never received the same amount of attention as the likes of Hallucinogen, Astral Projection or Koxbox, they are just as influential, to say the least. They were making highly melodic tracks as far back as 1992, and have quite a few classics tucked under their belt, from the milestone tunes "Aliens" and "Waiting For A New Life", to "Blade Runner", Chaotic Circus", "Free Lemonade", "Partycles" and probably half a dozen more I've forgot. Also not to be forgotten is their input in the Mystery Of The Yeti supergroup, which had a huge overall impact on the future sound and development of ambient music. Total Eclipse's 1995 debut album, Delta Aquarids sounds very old and dated today, but still remains a foundation stone in the genre, but it is their sophmore release, the marvellous double CD from 1996, intitled Violent Relaxation where the trio really shone through, and brought what is in my opinion one of the absolute pinnacles of the old school goa/psy trance movement, and merits its place on the top shelf of every serious fan of trance music!
Unfortunately, with the premature demise of the old school, the group's magic started to wear out as well. Still, 1999 saw the trio surprisingly release a downtempo-breakish album called Access Denied. The original purists were immediately disappointed and turned their heads away, but they sure missed out on a lot! It seems that the french producers, being dissatisfied with the direction trance music was pursuing, decided to chose a path hard to follow, and stayed true, so to speak. The album itself crossed many genres, blending the unblendable, and sounding like little else out on the market at that time. Total Eclipse were probably trying once again to bring new and fresh stuff to the table, just as they did some years back. Unfortunately, very few listeners understood, and shortly after, sided by the departure Serge Souque (he can today be found as one of the three members in The Good, The Bad & The Ugly project), who was quite probably the creative mind of the project, the remaining two guys occasionally dropped a track or two on some various artists compilation, but nothing worth too much of your attention. The three members can today be found literary all over the place, taking parts and collaborating in many projects, under various aliases, but I never found any of the newer material as nearly as moving and beautiful as their old Total Eclipse tracks, which are, simply put, all great!
See 1 reply