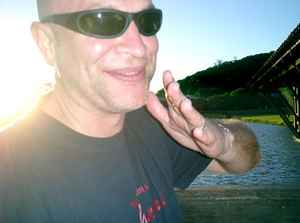 I won't repeat what everyone has said (though I really want to, because the man truly is a living, breathing acid-techno legend), but I would like to highlight that he's a super-cool dude aside from his music. I only know him from long-distance---I've been ordering from SUF's website since early doors, and I've had the pleasure of interacting with Chris (and Aaron) a few times through messages, and he's just a class act on a personal level too.

Heck, I ordered a record from SUF for the first time in a while (maybe 6-8 months) at the end of 2020, and Chris included a hand-written note on the invoice that it was nice to see me ordering again, and he hoped I was doing well in crazy times. Well, I'm happy to report that I am indeed, Chris, and don't ever change, man. Legend! (shit, I repeated what everyone else said twice, lol)

If you want to stay up forever and dance your ass off this is the man with your soundtrack.

Growing up with the P.P.M. in Saskatoon, SK during the 90s I got to hear Chris do live PA as part of Ha-Lo and spin his own style of hard acid techno on many occasions. Many great sets, especially @ WEMF Toronto and in a parka and gloves on the coldest Canada day ever in Saskatoon, but the most special was in '03 at the Cosmo Senior's Center in Saskatoon (a hand crafted banner on the wall reads "There are no strangers here, only friends you haven't met.") with a crowd of ~50 people and Chris gave us nearly three hours of relentless energy to dance and lose ourselves in the mix. The promoter failed to cover expenses, Chris played for free and hung out all night like the family reunion it was. A class act always.

The used market for Hard Acid Techno vinyl is poor, and I hope someday soon Chris & DAVE do a couple box-set re-issues, limited edition with a pair of slipmats. Check out "Chris Liberator & Sterling Moss - United Colors of Techno & The Sound Of London Acid Techno" for some great loops in the meantime.

October 30th 2009 in Zagreb's Boogaloo club was the first time I listened to Chris Knowles (aka Chris Liberator) live. Plain and simple, he annihilated the dance floor. It is not often we get members of London's legendary and pivotal Stay Up Forever collective down here, so every opportunity I get to attend a gig they're at - you can count me in.
Back to Chris. Production wise he is a well known and respected underground legend, a pioneer in London's squat scene, with countless acid techno classics tucked under his belt, as well as (more recently) harder, no nonsense techno bangers, like the stuff you can hear on Henry Cullen's Hydraulix imprint. Numerous remixes, collaborations and involvements in many projects marked his constant presence on the scene, but above all, his dedication and determination to always deliver the raw, fresh and plain different music is breath taking. Never venturing into mainstream waters, at least not intentionally, his productions are sharp and very (hate me for saying it) danceable. Favorites remain to this day the frenetic and pumping X-Ray O.K. recorded under the Star Power moniker, Cat's Eye, released on the "Typhoon EP" released on Prolekult (KULT 24) in 1998, and the toss-your-hands-up-in-the-air take on D.O.M.'s Acid War!
After the aforementioned party was over, I had the chance to run into him at the bar, and we had a nice fifteen minute chat about the history of acid music, the classics, the ups and downs of today's scene and so forth... A very down to earth, friendly and communicative guy. I gotta thank him for all the info about the music and so forth. Above all, a big amount of respect for carving his name into our ears, and for delivering such a powerful and furious set, at these times when it seems the slower and bleaker music you play, the more chances you have entering that top 100 DJ list.
Great guy, don't miss the chance to catch him live.