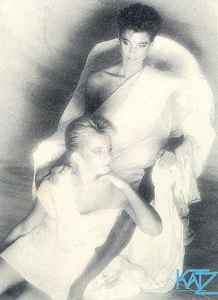 Profile:
The Swedish pop-duo "Katz" was formed in January, 1985. The line-up was Gunilla Katarina Backman (born in 1965) and Harriette Johnson, both born in Stockholm (Sweden) and graduated at the conservatory of Adolf Fredriks. Both of them have also studied ballet at the Academy of Stockholm. Before Katz, Harriette had performed as a dancer on stage and television, but had also sung vocals in many other Swedish bands. Gunilla made her debut on stage as an actress in The Sound of Music. In 1983 she played Snowwhite in a Swedish pantomimian theatre.

In 1985 she met the legendary Stockholm record producer Billy Butt who co-produced Katz' debut album. Swedish disco group Secret Service also contributed songs to the album (Visions of You, Loving You Is All I Know).

After Katz, Nilla turned solo and teamed up with Italian producer Fred Ventura of Time Records who wrote two songs for her: "New Day" & "Even If You Say". In the 90s, she and Fred were members of a house group called "Active" ("No Way Out", "Side By Side").
Gunilla is a very active stage actress nowadays. She has played in Sound of Music, Les Miserables, West Side Story, Elvira Madigan, Sunset Boulevard, Miss Saigon, Chess and most recently a musical about Greta Garbo.