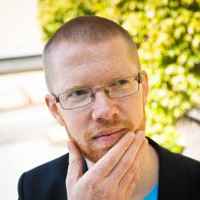 After graduating from senior high school he went to the academic university city of Uppsala, some 70 km north of Stockholm. He started studying music science, and took part in some of the well known academic choirs, such as The Academic Chamber Choir of Uppsala, Orphei Drängar and a few others. There he met the conductor and professor Stefan Parkman who became his teacher.

He then attended the Royal Academy of Music in Stockholm where he studied organ music, choir- and orchestra conducting and singing. He was a part of The Chamber Choir, conducted by professor Eric Ericsson and went on developing his music abilities doing some master classes and conducting various choirs.