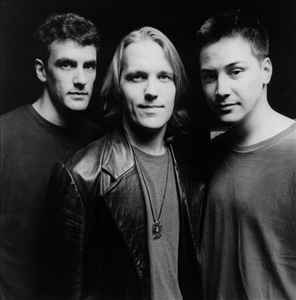 Profile:
Dogstar was an American alternative rock group active from the mid-1990s to the early 2000s. The band garnered media attention due to the non-musical activities of bassist Keanu Reeves, a famous Hollywood actor.

The genesis of Dogstar was a chance encounter between Reeves and Mailhouse in a supermarket in 1991; Mailhouse was wearing a Detroit Red Wings hockey sweater, and Reeves (an avid hockey fan and a keen player of the sport) asked if Mailhouse needed a goalie. Their shared interest in the sport developed into a friendship. Initially, they began jamming together in private. The band went through several lineups before Domrose joined in 1994. Eventually they decided to play for a live audience; a decision Reeves would later describe as "a huge mistake".

The band originally called themselves Small Fecal Matter, and then BFS (Big Fucking Shit, or Big Fucking Sound), before settling on Dogstar, after Mailhouse found the name in the book Sexus, written by Henry Miller.

The group released a four-track EP in early 1996, Quattro Formaggi (distributed by Zoo Entertainment) and followed this up with their debut album, Our Little Visionary, which was only distributed in Japan, but their fanbase was worldwide, and they played to audiences in the U.S., England, Australia and India.

Although the band members had other work commitments, a second album, Happy Ending followed in 1999, produced by Michael Vail Blum and Richie Zito. Domrose called the music on this record more "pop-aggressive" than the band's earlier work.

Their last performance was in October 2002 in Japan, and they have since folded. Reeves and Mailhouse later performed together in band Becky. Reeves left the band because of his working schedule, but he still plays with the band sometimes.
Sites:
MySpace, Wikipedia
Members:
Bret Domrose, Keanu Reeves, Robert Mailhouse