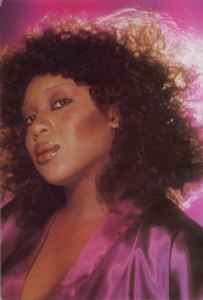 Active in the early 80's.
Best known for her early 1980's hit "Hit N Run Lover".
Till 1983 based in Montreal, Canada, but in 1983 she moved to England.
On Nov 2nd 2006, Carol Jiani confirmed on a discomusic.com forum that she did the vocals of the original 12" version Suzy Q's "Get On Up And Do It Again" and never got credited.
Sites:
instagram.com, MySpace
Aliases:
Uchenna Ikejiani
In Groups:
CJ's Arrival, Suzy Q
Variations:
Viewing All | Carol Jiani
Carol Jaini, Carol Jani, Carol Jianni, Carole Jiani