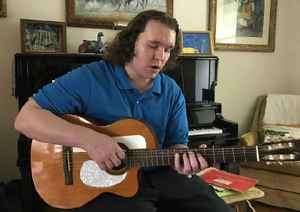 Real Name:
Andrew Neil Maternick
Profile:
Andrew Neil is an “Outsider Music” artist that evokes a distinct style and sound, yet one can hear subtle influences of artists like Kurt Cobain, Elliot Smith, Nick Drake and Donovan, as well as outsider artists like Daniel Johnston, Syd Barrett (After Pink Floyd), Elliott Smith or Conor Oberst. Some have referred to his raw style as Outsider Grunge Folk.

Andrew Neil Has written nearly 450 songs since his musical journey began in the winter of 2009. He began to write songs out of the blue following a head injury he sustained in a car accident in Apr 2009. Andrew continues to write songs by ear. He knows little to nothing about basic chords and music theory, yet his music resonates with many people. The most common response to his music is that it is raw, yet so authentic and real. It sticks to folks.
Sites:
en.everybodywiki.com, andrewneilmusic.com, linktr.ee
Variations:
Viewing All | Andrew Neil Maternick
Andrew Neil