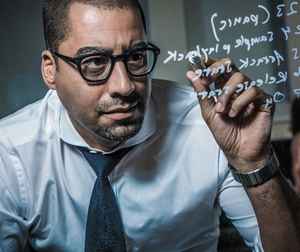 Real Name:
Neil Ollivierra
Profile:
Neil Ollivierra is a Detroit-born multi-disciplinary artist who composes electronic music as The Detroit Escalator Co. He first appeared in the early Detroit techno scene as the promoter of The Music Institute (1988-89); the legendary underground after-hours club that served as the pre-release audio testing grounds for the Transmat, KMS and Metroplex record labels. A growing acquaintance with resident DJ Derrick May led to his employment as the Transmat label manager during the labels' most prolific years (1988-1992), wherein legendary artists such as Carl Craig, James Pennington, and Stacey Pullen first exploded onto the global scene.

January 20, 2020
Anybody has some recommendations similar to this Detroit Ambient from Detroit Escalator Company?
Reply  See 3 replies Notify me 1 Helpful

May 21, 2019
Incredible artist. His sounds are both broad and deep in an electronic sense. It's perfect night time music, something I like to listen to whilst walking around a lonely urban environment.
Reply Notify me 2 Helpful

April 16, 2004
There's something about the DEC's music that is absolutely timeless. (If you've ever cruised down Woodward and marvelled at the collapse of urban America, or visited the Submerge record shop next to the burned out gas station it might take on even more significance for you.)

Everyone I have played these discs for - no matter what sort of music they like - has felt the same way. Very simple production yet absolutely distinctive - love the cut up broken 909 breakbeats, that have almost a drum and bass sort of feel with them. The whole thing has a dreamy, narrative sort of style to it - these are less "songs" than moods or snippets of life and feeling. Go home to an empty house, pop this in, and think about the past or lost loves...
Reply Notify me 15 Helpful