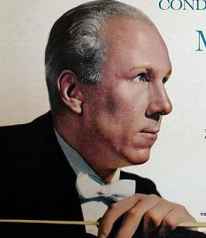 Anderson was born to Swedish immigrants in Massachusetts, where he studied piano at the New England Conservatory of Music and, in 1925, he entered Harvard University. At Harvard he studied theory with Walter Spalding, counterpoint with Edward Ballantine, harmony with George Enescu, composition with Walter Piston and Doublebass with Gaston Dufresne. He also studied organ with Henry Gideon.

Anderson continued his graduate studies at Harvard, and became the Director of the Harvard University Band. He wrote a number of catchy arrangements that eventually caught the ear of Arthur Fiedler. He made his first arrangement for Fiedler in 1936, and in 1938, The Boston Pops Orchestra performed his piece, Jazz Pizzicato. At Fielder's request, Anderson wrote the companion, Jazz Legato, in 1939.

In 1942 Leroy Anderson joined the U.S. Army. During his time in the armed forces, he wrote The Synocpated Clock and Promenade. In 1951, he was recalled for active duty for Korean War, and wrote his first hit Blue Tango. Throughout the 1950s and 1960s, Anderson wrote many more of his "miniature" pieces, most of which were first performed and recorded by Arthur Fiedler And The Boston Pops. His pieces, including Sleigh Ride, The Typewriter, Bugler's Holiday, and A Trumpeter's Lullaby are still performed by orchestras and bands ranging from school groups to professional organizations.