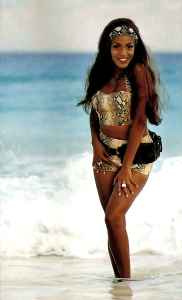 Kayo has been working with a lot of things, in the 80´s was she a big star in Sweden when she got a smash hit with "Vill Ha Dig", with the group Free Style (2). Kayo left the group in 1981. She then worked as a backup singer and dancer for various Swedish artists such as The Creeps and Anders Glenmark. She is a classically trained ballet dancer and performed professionally for many years.

In 1990 she became part of the Nordik beat scene and released a self-titled influenced club-soul album on The SweMix Label, the music was mostly swingbeat but some tracks were reggae and house and featured hip hop influences. It was produced by label co-founder Stonebridge with Christian Falk and Alexander Bard (from Army of lovers). She released 4 hit singles of the album. Her second album was a Swedish language soul-pop album entitled ‘’Kärleksland’’ (1993), which featured songs by Orup and was well received by radio. "Out There" was a album with world music. 1997 "Le Click feat. Kayo" was released under that name only in the USA.

Kayo had the leading part in the Swedish movie named "Pillertrillaren" in 1994. Between 1994-1996 was she one of the leaders in the TV-show "Fångarna På Fortet". At the end of 1996 she moved to the USA and became a "Housestar".

In the year 2000 she meet Blossom and together with Gladys they starred with Afro-Dite, they did shows with music from the 70´s.

Today she works as a skin therapist and but also takes on showbiz assignments. In spring 2010 she performed at the Melodifestivalen, not as a competitor, but performing a medley of past winning songs with several previous winners. In 2010 the co-hosted pan-Scandinavian TV-show Inför Eurovision Song Contest 2010, series of four episodes, analyzing all the competing songs submitted to that year's Eurovision Song Contest. She also works as a DJ, co-runs a night club and performs with disco & cocktailjazz band Cotton Club and Afro-Dite.
Sites:
kayo.se, Wikipedia
Aliases:
Kayo Shekoni
Variations:
Viewing All | Kayo (2)
Kayo (Of Le Click)