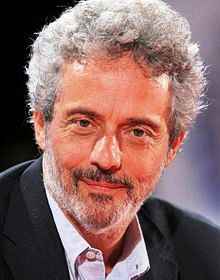 Real Name:
Nicola Piovani
Profile:
Italian pianist, composer and conductor. Born in Rome 26 May 1946 is a famous author of soundtracks. He has a difficult early career (like many other artists): piano player (sometimes also drums) in the cabaret , anonymous orchestrator for the great greek composer Manos Hadjidakis, writer of the music scene for Carlo Cecchi's company theater, co-author of 2 albums by Fabrizio De André, arranger for Produttori Associati. However, his real job is the soundtracks. His first in 1968 for the student movement, but real onset is in a feature film with actress Irene Papas in 1969. Then, in the early 70s, for over a decade, works with Marco Bellocchio (first movie Nel Nome del Padre, 1972) and also with many other great Italian directors including Federico Fellini with whom forms three soundtracks taking the place of late Nino Rota. In the '90s works in association with Roberto Benigni, culminated with La Vita è Bella winning the Oscar in 1999 for best soundtrack of drama. In his 40 years career, in addition to more than 100 films, there is a very intense activity in the theater. We recall I Sette Re di Roma written by Luigi Magni and Pietro Garinei by a great Gigi Proietti. In year 2000, the nomination for Grammy Award.
Sites:
nicolapiovani.it, Facebook, Twitter, instagram.com
In Groups:
Nicola Piovani Orchestra
Variations:
Viewing All | Nicola Piovani
N- Piovani, N. Piovani, N.Piovani, Nicola Piovanni, Nicolo Piovani, Piovani, ニコラ・ピオヴァーニ