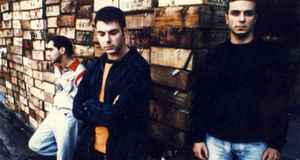 Profile:
One of the most successful ever electronic projects in Greece. Loosely formed in Athens in the late 1980's, they completed their first album in 1991. Influenced by the late 1980's electronic scene, they went on to produce a hybrid of electro-tech sound with rap-like vocals. As the years passed by they experimented with ambient and house, and even dared to collaborate with well-known Greek pop singers and composers. Αντώνης Πι left the band in 1996 and they remained active as a duo until late 1997.

September 14, 2021
This "One of the most successful ever electronic projects in Greece" is an exaggeration, if not a lie.The band became something like a legend some years after they had disbanded, with more and more people discovering their beautiful music. Up untl 1997 (or was it 98?) i doubt they ever played a gig with more than 150 people present. I was there, many times//